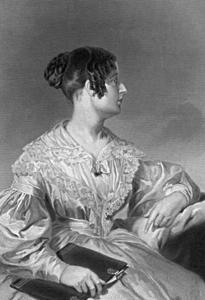 Felicia Dorothea Hemans (25 September 1793 – 16 May 1835) was an English poet (who identified as Welsh by adoption). Two of her opening lines, "The boy stood on the burning deck" and "The stately homes of England", have acquired classic status.
Read more or edit on Wikipedia