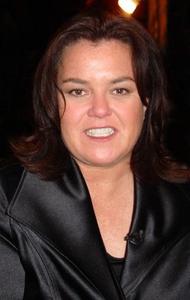 Roseann O'Donnell (born March 21, 1962) is an American comedian, producer, actress, author, and television personality. She began her comedy career as a teenager and received her breakthrough on the television series Star Search in 1984. After a series of television and film roles that introduced her to a larger national audience, O'Donnell hosted her own syndicated daytime talk show, The Rosie O'Donnell Show, between 1996 and 2002, which won several Daytime Emmy Awards. During this period, she developed the nickname "Queen of Nice", as well as a reputation for philanthropic efforts. From 2006 to 2007, O'Donnell endured a controversial run as the moderator on the daytime talk show The View, which included a public feud with Donald Trump and on-air disputes regarding the Bush administration's policies with the Iraq War. She hosted Rosie Radio on Sirius XM Radio between 2009 and 2011, and from 2011 to 2012 hosted a second, short-lived talk show on OWN, The Rosie Show. O'Donnell returned to The View in 2014, leaving after a brief five-month run due to personal issues. From 2017 to 2019, she starred on the Showtime comedy series SMILF. In addition to comedy, film, and television, O'Donnell has also been a magazine editor, celebrity blogger, and author of several memoirs, including Find Me (2002) and Celebrity Detox (2007). She used the Find Me $3 million advance to establish her For All foundation and promote other charity projects, encouraging celebrities on her show to take part. She has also been an outspoken advocate for lesbian rights and gay adoption issues. O'Donnell is a foster and adoptive mother. She was named The Advocate's 2002 Person of the Year; in May 2003, she became a regular contributor to the magazine. O'Donnell also continues to be a television producer and a collaborative partner in the LGBT family vacation company, R Family Vacations.
Read more or edit on Wikipedia