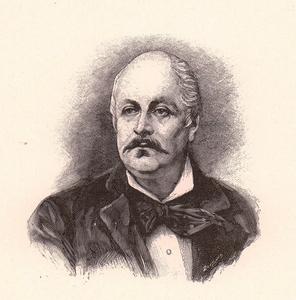 Xavier Henri Aymon Perrin, Count of Montépin (10 March 1823 in Apremont, Haute-Saône – 30 April 1902 in Paris) was a popular French novelist.The author of serialised novels (feuilletons) and popular plays, he is best known for the 19th-Century best-seller, La Porteuse de pain (The Bread Peddler), which was first published in Le Petit Journal, from 1884 to 1889, and underwent many adaptations for theatre, film and television. Le Médecin des pauvres (Physician to the Poor), appeared in 1861 and was the subject of a plagiarism suit by author Louis-Étienne Jousserandot. Although the evidence was strongly in favour of Jousserandot, neither party prevailed and both parties were ordered to pay the court costs. Les Filles de plâtre (The Daughters of the Plasterer), appearing in 1855, was condemned as obscene and Perrin was tried and sentenced to three months in prison and a fine of 500 Francs.
Read more or edit on Wikipedia