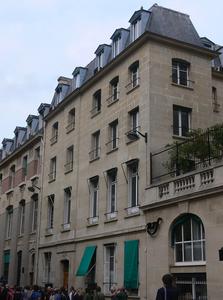 Éditions Gallimard (French: [edisjɔ̃ ɡalimaːʁ]) is one of the leading French book publishers. In 2003 it and its subsidiaries published 1,418 titles.Founded by Gaston Gallimard in 1911, the publisher is now majority-owned by his grandson Antoine Gallimard.Éditions Gallimard is a subsidiary of Groupe Madrigall, the third largest French publishing group.
Read more or edit on Wikipedia 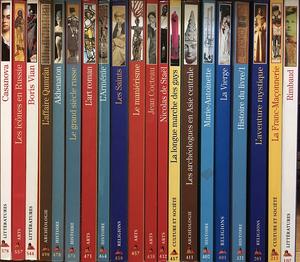 Découvertes Gallimard (French: [dekuvɛʁt ɡalimaːʁ], lit. 'Gallimard Discoveries'; in United Kingdom: New Horizons, in United States: Abrams Discoveries) is an editorial collection of illustrated monographic books published by the Éditions Gallimard. The books are concise introductions to particular subjects, intended for a general audience but written by experts.The collection was created by Pierre Marchand, made in the style of livre d'art and printed in pocket format. The first volume À la recherche de l'Égypte oubliée (UK & US editions: The Search for Ancient Egypt) appeared on 21 November 1986, written by the French Egyptologist Jean Vercoutter. These scholarly little books then released in successive volumes, without a systematic plan, each of which is structured like a separate book (see monographic series). There were 588 titles by November 2012, with more than 160 volumes of spin-offs and catalogues as of 2021.
Read more or edit on Wikipedia

The Collection Blanche is the great collection of French literature of the éditions Gallimard. It appeared in 1911, and at the beginning was nourished by the publications of La Nouvelle Revue française, the brand "Librairie Gallimard" appeared only after July 1919. Since its creation, "La Blanche", which takes its name from the cream color of its cover, has published 6500 titles, of which 3800 are still available today. In addition to the "NRF" logo originally designed by Jean Schlumberger, the graphic charter of this collection - a black border surrounding two red edges - is inspired by the éditions de La Phalange, with its first title, L'Otage by Paul Claudel, published 26 May 1911. For a time, the first printer of this collection was Verbeke, director of "The St. Catherine Press Ltd", based in Bruges. The generic formats evolved very little over the years, which is a unique case in the history of French contemporary publishing, although the cream color changed to bright yellow filmed in the 1980s. Champion of literary prizes, from 1911 to 2016 the series has been awarded 33 prix Goncourt, 30 prix Femina, 17 prix Renaudot, 10 prix Médicis, 16 prix Interallié, 30 Grand prix du roman de l'Académie française and 4 prix du Livre Inter.
Read more or edit on Wikipedia

The Pléiade encyclopedia (fr:Encyclopédie de la Pléiade) is a collection of Éditions Gallimard, publishing encyclopedic-type scientific texts on major fields of knowledge. It is part of the Bibliothèque de la Pléiade, of which it takes the format and aesthetics of the books, with stars on the back. The publication extended from 1956 to 1991. The creation of this collection was entrusted to Raymond Queneau. Some of the volumes have been reprinted in the Folio Essais collection.
Read more or edit on Wikipedia