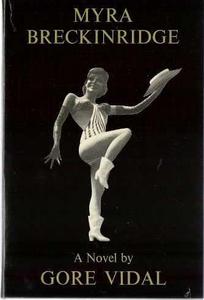 Myra Breckinridge is a 1968 satirical novel by Gore Vidal written in the form of a diary. Described by the critic Dennis Altman as "part of a major cultural assault on the assumed norms of gender and sexuality which swept the western world in the late 1960s and early 1970s", the book's major themes are feminism, transsexuality, American expressions of machismo and patriarchy, and deviant sexual practices, as filtered through an aggressively camp sensibility. The controversial book is also "the first instance of a novel in which the main character undergoes a clinical sex-change". Set in Hollywood in the 1960s, the novel also contains candid and irreverent glimpses into the machinations within the film industry. Myra Breckinridge was dismissed by some of the era's more conservative critics as pornographic at the time of its first publication in February 1968; nevertheless, the novel immediately became a worldwide bestseller and has since come to be considered a classic in some circles. "It is tempting to argue that Vidal said more to subvert the dominant rules of sex and gender in Myra than is contained in a shelf of queer theory treatises", wrote Dennis Altman. Critic Harold Bloom cites the novel as a canonical work in his book The Western Canon. Vidal called Myra the favorite of his books, and published a sequel, Myron, in 1974. The novel was adapted into a 1970 film of the same name, which was universally panned. Vidal disowned the film, calling it "an awful joke".In his 1995 memoir Palimpsest, Vidal said the voice of Myra may have been inspired by the "megalomania" of Anaïs Nin's diaries. Indeed, the story is told through increasingly erratic entries in Myra's own personal diary and recordings on events given by Buck Loner.
Read more or edit on Wikipedia