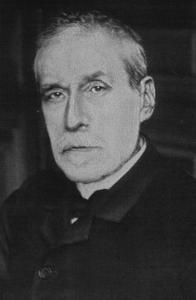 Étienne Émile Marie Boutroux (French: [butʁu]; 28 July 1845 – 22 November 1921) was an eminent 19th century French philosopher of science and religion, and an historian of philosophy. He was a firm opponent of materialism in science. He was a spiritual philosopher who defended the idea that religion and science are compatible at a time when the power of science was rising inexorably. His work is overshadowed in the English-speaking world by that of the more celebrated Henri Bergson. He was elected membership of the Academy of Moral and Political Sciences in 1898 and in 1912 to the Académie française.
Read more or edit on Wikipedia