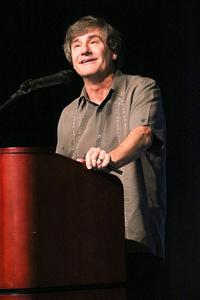 Alexei Vladimir "Alex" Filippenko (; born July 25, 1958) is an American astrophysicist and professor of astronomy at the University of California, Berkeley. Filippenko graduated from Dos Pueblos High School in Goleta, California. He received a Bachelor of Arts in physics from the University of California, Santa Barbara in 1979 and a Ph.D. in astronomy from the California Institute of Technology in 1984, where he was a Hertz Foundation Fellow. He was a Miller Fellow at UC Berkeley and was subsequently appointed to a faculty position at the same institution. He was later named a Miller Research Professor for Spring 1996 and Spring 2005. His research focuses on supernovae and active galaxies at optical, ultraviolet, and near-infrared wavelengths.
Read more or edit on Wikipedia

First Results from the Lick AGN Monitoring Project: The Mass of the Black Hole in Arp 151 ( 2008 )