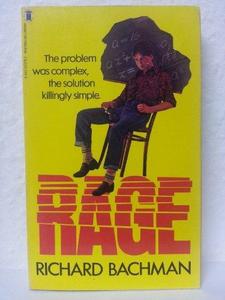 Rage (written as Getting It On; the title was changed before publication) is a psychological thriller novel by American writer Stephen King, the first he published under the pseudonym Richard Bachman. It was first published in 1977 and then, it was collected in 1985 in the hardcover omnibus The Bachman Books. The novel describes a school shooting, and has been associated with actual high school shooting incidents in the 1980s and 1990s. In response, King allowed the novel to fall out of print, and in 2013, he published a non-fiction, anti-firearms violence essay titled "Guns".
Read more or edit on Wikipedia