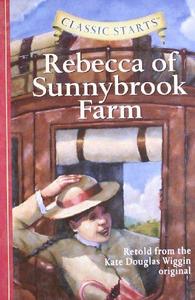 Rebecca of Sunnybrook Farm is a play written by Kate Douglas Wiggin and Charlotte Thompson. It is an adaptation of Wiggin's novels about the character Rebecca Rowena Randall, including elements from the 1903 novel of the same name and the 1907 follow-up, New Chronicles of Rebecca. Producers Klaw and Erlanger debuted it at the Court Square Theatre in Springfield, Massachusetts on November 15, 1909. After touring New England for a season, it appeared on Broadway, opening at the Republic Theatre on October 3, 1910. The play received positive reviews and was used as the basis for subsequent movie adaptations.
Read more or edit on Wikipedia

language: English
based on: Rebecca of Sunnybrook Farm