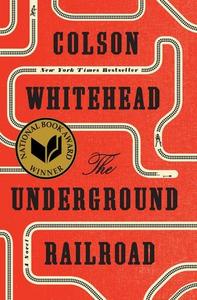 The Underground Railroad is a historical fiction novel by American author Colson Whitehead, published by Doubleday in 2016. The alternate history novel tells the story of Cora and Caesar, two slaves in the antebellum South during the 19th century, who make a bid for freedom from their Georgia plantation by following the Underground Railroad, which the novel depicts as a rail transport system with safe houses and secret routes. The book was a critical and commercial success, hitting the bestseller lists and winning several literary awards, including the Pulitzer Prize for Fiction, the National Book Award for Fiction, the Arthur C. Clarke Award, and the 2017 Andrew Carnegie Medal for Excellence. A TV miniseries adaptation, written and directed by Barry Jenkins, was released in May 2021.
Read more or edit on Wikipedia