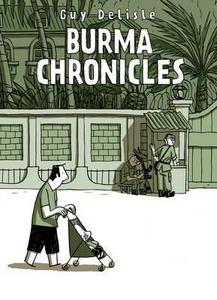 See Burmese chronicles for the royal chronicles of Burma (Myanmar).Burma Chronicles (French: Chroniques Birmanes) is a 2007 Canadian graphic novel written and illustrated by Guy Delisle. Burma Chronicles is a travelogue about Delisle's time spent in Burma with his young son, Louis, and his wife, Nadège, an administrator for Médecins Sans Frontières (MSF). Originally written in French, the book was translated into English by Helge Dascher and published by Drawn & Quarterly in 2008.
Read more or edit on Wikipedia