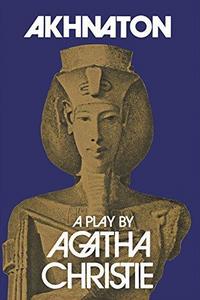 Akhnaton is a play by Agatha Christie. It was written in 1937, around the same time she was writing Death on the Nile. It is set in Ancient Egypt, and followed the exploits of the Egyptian Pharaoh Akhnaton, his wife Nefertiti and his successor Tutankhaton (who would take the name Tutankhamun when he became Pharaoh). In writing the play, Christie was assisted by the eminent Egyptologist, Stephen Glanville, who was a friend of both her and her husband, Max Mallowan. In her 1977 autobiography, Christie confessed that she never thought that the play would be produced but that she simply enjoyed writing plays or writing something different from that which she was used to. There is no record of any serious attempt to get the play staged once it had been written, but Charles Osborne, in his book The Life and Crimes of Agatha Christie puts forward the theory that the publishers thought it not commercial, and was not what the public expected of Agatha Christie, who was seen at the time as purely a writer of crime fiction. In May 1972, Christie came across the manuscript, and sent it to her publisher in view of the interest in ancient Egypt prompted by the Treasures of Tutankhamun exhibition which ran at the British Museum from 30 March until 30 September of that year, although she admitted that it would be an expensive production to stage. She made minor revisions to her 1937 manuscript and asked that it be published; however there were still major differences between events in the play and what was then known of this time in Egyptian history (such as Akhnaton now being known to have a second wife called Kiya). The play was published by Collins in May 1973. A new, hardcover, facsimile edition of the play was issued in 2009. The play has been used by some amateur groups and repertory theatres, but is seldom performed. Aside from the commercial issues of the subject matter, the play requires eleven scene changes and over twenty speaking parts.
Read more or edit on Wikipedia