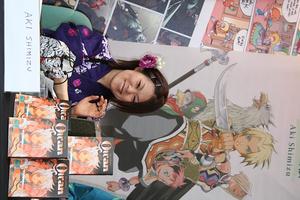 Aki Shimizu (志水 アキ, Shimizu Aki) is a manga artist who hails from Ōmuta, Fukuoka. She contributed the art for Blood Sucker: Legend of Zipangu (2000), Graduale der Wolken (2001), and adapted a manga version of Suikoden III (2002) based on Konami's video game. In 2003, she began Qwan, an original story of her own.
Read more or edit on Wikipedia

novel by Natsuhiko Kyogoku. It turned into a live-action film, a manga, and an anime TV series.