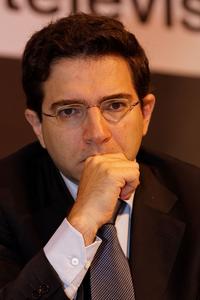 Alexandre Najjar (born February 5, 1967) is a Lebanese and French writer, lawyer, businessman, journalist and literary critic. He was born in Beirut and studied at Panthéon-Assas University and University of Paris 1 Pantheon-Sorbonne. He holds a Doctorate in Business administration and is specialized in banking and finance law. He is the author of more than 30 books translated into more than 12 languages. In addition to poetry and novels, he has written non fiction works like the biography of Khalil Gibran, the author of The Prophet., a book about the 1936 Summer Olympic Games in Nazi Germany (Berlin 36) and a book about the Arab Spring (Anatomie d'un tyran). Najjar is also a columnist and critic for L'Orient littéraire, the literary supplement of the Lebanese French-language daily L'Orient-Le Jour. He lives in Paris and Beirut. In 2009, he received the Prix Mediterranee for his book Phenicia and a distinction from the French Academy (L'Académie française), in addition to numerous Lebanese and international awards. He has given lectures in Paris, Poitiers, Perpignan, Marseille, Washington, New York, Mexico, Stockholm, Goteborg, Ireland, Italy, Moscow, Frankfurt, Berlin, Leipzig, Switzerland, United Arab Emirates and other countries/cities.
Read more or edit on Wikipedia