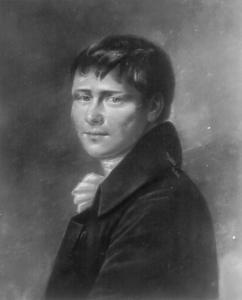 Bernd Heinrich Wilhelm von Kleist (18 October 1777 – 21 November 1811) was a German poet, dramatist, novelist, short story writer and journalist. His best known works are the theatre plays Das Käthchen von Heilbronn, The Broken Jug, Amphitryon and Penthesilea, and the novellas Michael Kohlhaas and The Marquise of O. Kleist died by suicide together with a close female friend who was terminally ill. The Kleist Prize, a prestigious prize for German literature, is named after him, as was the Kleist Theater in his birthplace Frankfurt an der Oder.
Read more or edit on Wikipedia