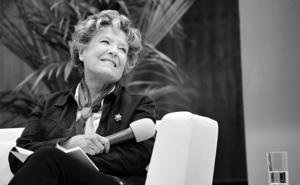 Dacia Maraini (Italian pronunciation: [ˈdaːtʃa maraˈiːni]; born November 13, 1936) is an Italian writer. Maraini's work focuses on women's issues, and she has written numerous plays and novels. She has won awards for her work, including the Formentor Prize for L'età del malessere (1963); the Premio Fregene for Isolina (1985); the Premio Campiello and Book of the Year Award for La lunga vita di Marianna Ucrìa (1990); and the Premio Strega for Buio (1999). In 2013, Irish Braschi's biographical documentary I Was Born Travelling told the story of her life, focusing in particular on her imprisonment in a concentration camp in Japan during World War II and the journeys she made around the world with her partner Alberto Moravia and close friends Pier Paolo Pasolini and Maria Callas.
Read more or edit on Wikipedia