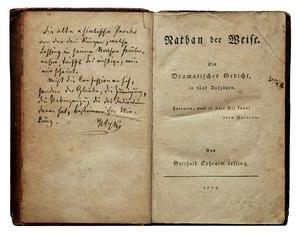 Nathan the Wise (original German title: Nathan der Weise, pronounced [ˈnaːtaːn deːɐ̯ ˈvaɪ̯zə] (listen)) is a play published by Gotthold Ephraim Lessing in 1779. It is a fervent plea for religious tolerance. It was never performed during Lessing's lifetime and was first performed in 1783 at the Döbbelinsches Theater in Berlin.Set in Jerusalem during the Third Crusade, it describes how the wise Jewish merchant Nathan, the enlightened sultan Saladin, and the (initially anonymous) Templar, bridge their gaps between Judaism, Islam, and Christianity. Its major themes are friendship, tolerance, relativism of God, a rejection of miracles and a need for communication.
Read more or edit on Wikipedia