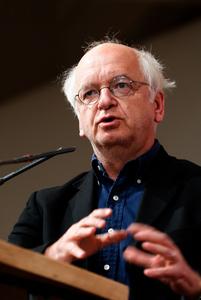 Érik Orsenna is the pen-name of Érik Arnoult (born 22 March 1947) a French politician and novelist. After studying philosophy and political science at the Institut d'Études Politiques de Paris ("Sciences Po"), Orsenna specialized in economics at the London School of Economics. He was a close collaborator of François Mitterrand and held several government positions in the 1980s and 1990s. He is a member (currently on leave) of the Conseil d'État, having been appointed in 1985. He was elected to the Académie Française on 28 May 1998. He won the 1990 International Nonino Prize in Italy. For Voyage au pays du coton he received the second prize of the Lettre Ulysses Award in 2006.
Read more or edit on Wikipedia