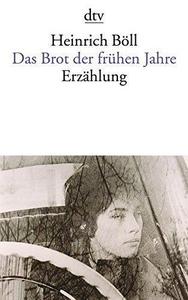 The Bread of Those Early Years

The Bread of Those Early Years (German: Das Brot der frühen Jahre) is a 1955 novella by the West German writer Heinrich Böll. It concerns Walter Fendrich, a young man living alone in a post-war German city (probably based on Cologne), making ends meet as a washing machine repair man. The story takes place on a single March day in 1949 when Walter meets the daughter of a family friend, whom he is supposed to help settle into her student lodgings. So enraptured is he by Hedwig that he sees his whole life anew — the death of his mother, his relationship with his father, postwar privations and his negative experiences as an apprentice. Whether Walter can truly expect his epiphany to be life-transforming, however, is a question that will be in the reader's mind as the story unfolds.The novella was adapted into a 1962 film with the same title.
Read more or edit on Wikipedia