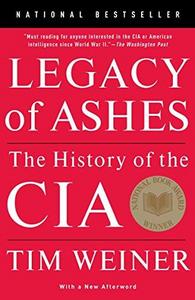 Legacy of Ashes: The History of the CIA is a 2007 book by Tim Weiner. Legacy of Ashes is a detailed history of the Central Intelligence Agency from its creation after World War II, through the Cold War years and the War on Terror. The book is based on more than 50,000 documents, primarily from the archives of the CIA, and hundreds of interviews with CIA veterans, including ten Directors of Central Intelligence. Legacy of Ashes won the 2007 National Book Award for Nonfiction.The title of the book comes from a misrepresented quotation from US President Dwight Eisenhower during a meeting of the National Security Council in 1961. Weiner incorrectly attributes the phrase "legacy of ashes" to Eisenhower's assessment of the CIA's performance under his administration. However, the January 5, 1961 meeting of the National Security Council focused on perceived redundancies in each military service's intelligence arms. The memorandum of discussion from the meeting notes that President Eisenhower remarked, "... each Military Service developed its own intelligence organization. [Eisenhower] thought this situation made little sense in managerial terms. He had suffered an eight-year defeat on this question but would leave a legacy of ashes for his successor." The CIA was very critical of the book, declaring that "anyone who wants a balanced perspective of CIA and its history should steer well clear of Legacy of Ashes."
Read more or edit on Wikipedia