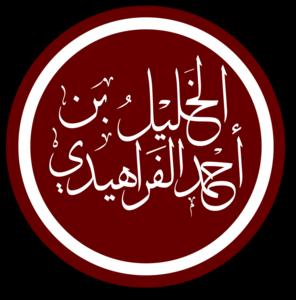 Abu ‘Abd ar-Raḥmān al-Khalīl ibn Aḥmad ibn ‘Amr ibn Tammām al-Farāhīdī al-Zahrāni al-Azdī al-Yaḥmadī (Arabic: أبو عبدالرحمن الخليل بن أحمد الفراهيدي الزهراني‎; 718 – 786 CE), known as Al-Farāhīdī, or Al-Khalīl, was an Arab philologist, lexicographer and leading grammarian of Basra based on Iraq . He is from the Zahran tribe (a branch of a larger tribe called Azd) . He made the first dictionary of the Arabic language – and the oldest extant dictionary – Kitab al-'Ayn (Arabic: كتاب العين‎) - "The Source", introduced the now standard harakat (vowel marks in Arabic script) system, and was instrumental in the early development of ʿArūḍ (study of prosody), musicology and poetic metre. His linguistic theories influenced the development of Persian, Turkish and Urdu prosody. The "Shining Star" of the Basran school of Arabic grammar, a polymath and scholar, he was a man of genuinely original thought.Al-Farahidi was the first scholar to subject the prosody of Classical Arabic poetry to a detailed phonological analysis. The primary data he listed and categorized in meticulous detail was extremely complex to master and utilize, and later theorists have developed simpler formulations with greater coherence and general utility. He was also a pioneer in the field of cryptography, and influenced the work of Al-Kindi.
Read more or edit on Wikipedia