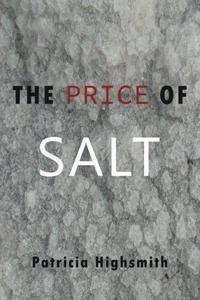 The Price of Salt

The Price of Salt (later republished under the title Carol) is a 1952 romance novel by Patricia Highsmith, first published under the pseudonym "Claire Morgan". Highsmith—known as a suspense writer based on her psychological thriller Strangers on a Train—used an alias because she did not want to be tagged as "a lesbian-book writer", and because of the use of her own life references for characters and occurrences in the story. Though Highsmith had many sexual and romantic relationships with women and wrote over 22 novels and numerous short stories, The Price of Salt is her only novel about an unequivocal lesbian relationship, and its relatively happy ending was unprecedented in lesbian literature. It is also notable for being the only one of her novels with "a conventional 'happy ending'" and characters who had "more explicit sexual existences".A British radio adaptation of the novel was broadcast in 2014. Carol, a film adaptation nominated for six Academy Awards and nine British Academy Film Awards, was released in 2015.
Read more or edit on Wikipedia