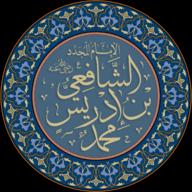 Abū ʿAbdillāh Muḥammad ibn Idrīs al-Shāfiʿī (Arabic: أَبُو عَبْدِ ٱللهِ مُحَمَّدُ بْنُ إِدْرِيسَ ٱلشَّافِعِيُّ, 767–19 January 820 CE) was an Arab Muslim theologian, writer, and scholar, who was one of the first contributors of the principles of Islamic jurisprudence (Uṣūl al-fiqh). Often referred to as 'Shaykh al-Islām', al-Shāfi‘ī was one of the four great Sunni Imams, whose legacy on juridical matters and teaching eventually led to the formation of Shafi'i school of fiqh (or Madh'hab). He was the most prominent student of Imam Malik ibn Anas, and he also served as the Governor of Najar. Born in Gaza in Palestine (Jund Filastin), he also lived in Mecca and Medina in the Hejaz, Yemen, Egypt, and Baghdad in Iraq. Source: Wikipedia (en)