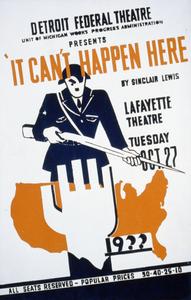 It Can't Happen Here is a semi-satirical 1935 political novel by American author Sinclair Lewis and a 1936 play by Lewis and John C. Moffitt adapted from the novel. The novel was published during the heyday of fascism in Europe, which was reported on by Dorothy Thompson, Lewis' wife. The novel describes the rise of Berzelius "Buzz" Windrip, a demagogue who is elected President of the United States, after fomenting fear and promising drastic economic and social reforms while promoting a return to patriotism and "traditional" values. After his election, Windrip takes complete control of the government and imposes totalitarian rule with the help of a ruthless paramilitary force, in the manner of European fascists like Adolf Hitler and Benito Mussolini. The novel's plot centers on journalist Doremus Jessup's opposition to the new regime and his subsequent struggle against it as part of a liberal rebellion. Reviewers at the time, and historians and literary critics ever since, have emphasized the resemblance with Louisiana politician Huey Long, who used strong-arm political tactics and who was building a nationwide "Share Our Wealth" organization in preparing to run for president in the 1936 election. He was assassinated in 1935 just prior to the novel's publication.
Read more or edit on Wikipedia