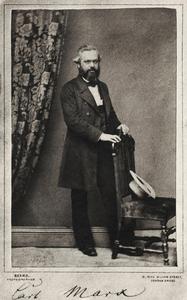 Economic and Philosophic Manuscripts of 1844

The Economic and Philosophic Manuscripts of 1844 (German: Ökonomisch-philosophische Manuskripte aus dem Jahre 1844), also referred to as the Paris Manuscripts (Pariser Manuskripte) or as the 1844 Manuscripts, are a series of notes written between April and August 1844 by Karl Marx, published posthumously in 1932. The notebooks were compiled in their original German in the Soviet Union by researchers at Moscow's Marx–Engels–Lenin Institute, decades after Marx's lifetime. They were first released in Berlin in 1932, and in 1933, there followed a republication of this work in the Soviet Union (Moscow-Leningrad), also in German. Their publication greatly altered the reception of Marx by situating his work within a theoretical framework that had until then been unavailable to his followers.
Read more or edit on Wikipedia