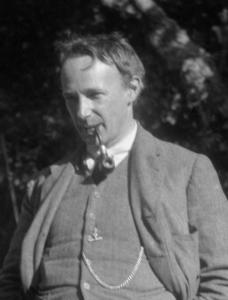 George Edward Moore (4 November 1873 – 24 October 1958) was an English philosopher – like Bertrand Russell, Ludwig Wittgenstein and earlier Gottlob Frege, among the founders of analytic philosophy. He and Russell led the turn from idealism in British philosophy, and became known for advocating common-sense concepts and contributing to ethics, epistemology and metaphysics. He was said to have an "exceptional personality and moral character". Ray Monk later dubbed him "the most revered philosopher of his era". As Professor of Philosophy at the University of Cambridge, he influenced but abstained from the Bloomsbury Group. He edited an influential journal, Mind. A fellow of the British Academy from 1918, he was among the intellectually secret Cambridge Apostles in 1894–1901 and chaired the Cambridge University Moral Sciences Club in 1912–1944. As a humanist, he served as President of the British Ethical Union (now Humanists UK) in 1935–1936.
Read more or edit on Wikipedia