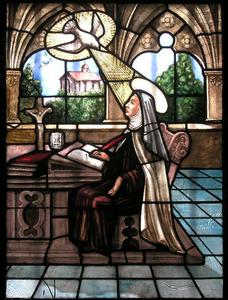 The Way of Perfection (Spanish: Camino de Perfección) is a 1577 book and a method for making progress in the contemplative life written by St. Teresa of Ávila, the noted Discalced Carmelite nun for the members of the reformed monastery of the Order she had founded. Teresa was a major figure of the Counter-Reformation in 16th-century Spain, and eventually was named a Doctor of the Church, while her work became a classic text in Christian spirituality and mysticism, especially in the realms of prayer in Christianity and Spanish Renaissance literature. Teresa called this a "living book" and in it set out to teach her nuns how to progress through prayer and Christian meditation. She discusses the rationale for being a Carmelite, and the rest deals with the purpose of and approaches to spiritual life.
Read more or edit on Wikipedia