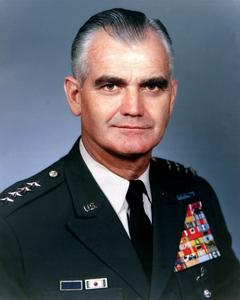 William Childs Westmoreland (March 26, 1914 – July 18, 2005) was a United States Army general, most notably commander of United States forces during the Vietnam War from 1964 to 1968. He served as Chief of Staff of the United States Army from 1968 to 1972. Westmoreland adopted a strategy of attrition against the Viet Cong and the North Vietnamese Army, attempting to drain them of manpower and supplies. He also made use of the United States' edge in artillery and air power, both in tactical confrontations and in relentless strategic bombing of North Vietnam. Public support for the war eventually diminished, especially after the Battle of Khe Sanh and the Tet Offensive in 1968. By the time he was re-assigned as Army Chief of Staff, United States military forces in Vietnam had reached a peak of 535,000 personnel. Westmoreland's strategy was ultimately politically unsuccessful. Growing United States casualties and the draft undermined United States support for the war, while large-scale casualties among non-combatants weakened South Vietnamese support. This also failed to weaken North Vietnam's will to fight, and the Government of South Vietnam—a factor largely out of Westmoreland's control—never succeeded in establishing enough legitimacy to quell defections to the Viet Cong.
Read more or edit on Wikipedia 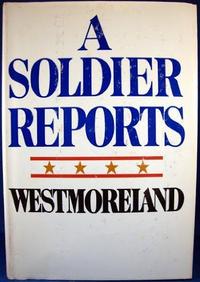