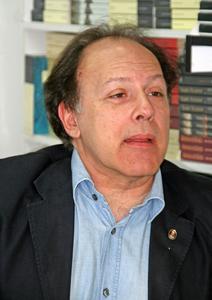 Javier Marías (born in Madrid, Spain on 20 September 1951) is a Spanish novelist, translator, and columnist. Marías has published fifteen novels, including A Heart So White (Corazón tan blanco, 1992) and Tomorrow in the Battle Think on Me (Mañana en la batalla piensa en mí, 1994). In addition to his novels, he has published three collections of short stories and various essays. As one of Spain's most celebrated novelists, his work has been translated into forty-four languages and has sold over eight and a half million copies internationally. He has received several awards for his work, such as the Rómulo Gallegos Prize (1994), the International IMPAC Dublin Literary Award (1997), the International Nonino Prize (2011), and the Austrian State Prize for European Literature (2011).Marías studied philosophy and literature at the Complutense University of Madrid before going on to teach at several universities, including his alma mater, universities in Oxford and Venice, and Wellesley College in Massachusetts. In 1997, he was awarded the title of King of the Kingdom of Redonda by its predecessor Jon Wynne-Tyson for his understanding of the kingdom and for mentioning the story of one of its previous kings, John Gawsworth, in his novel All Souls (Todas las almas, 1989).
Read more or edit on Wikipedia