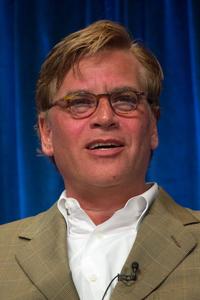 Aaron Benjamin Sorkin (born June 9, 1961) is an American playwright, screenwriter, and film director. Born in New York City, Sorkin developed a passion for writing at an early age. He has earned an Academy Award, a BAFTA Award, five Primetime Emmy Awards, and three Golden Globes. His stage works include the Broadway plays A Few Good Men, The Farnsworth Invention, and To Kill a Mockingbird, as well as the television series Sports Night (1998–2000), The West Wing (1999–2006), Studio 60 on the Sunset Strip (2006–07), and The Newsroom (2012–14). He wrote the film screenplay for the legal drama A Few Good Men (1992), the comedy The American President (1995), and several biopics including Charlie Wilson's War (2007), Moneyball (2011), and Steve Jobs (2015). For writing 2010's The Social Network, he won an Academy Award for Best Adapted Screenplay and Golden Globe Award for Best Screenplay. Sorkin made his directorial film debut with crime drama Molly's Game (2017), and continued directing with the historical legal drama The Trial of the Chicago 7 (2020), and the show business drama Being the Ricardos (2021). As a writer, Sorkin is recognized for his trademark fast-paced dialogue and extended monologues, complemented by frequent collaborator Thomas Schlamme's storytelling technique called the "walk and talk". These sequences consist of single tracking shots of long duration involving multiple characters engaging in conversation as they move through the set; characters enter and exit the conversation as the shot continues without any cuts.
Read more or edit on Wikipedia