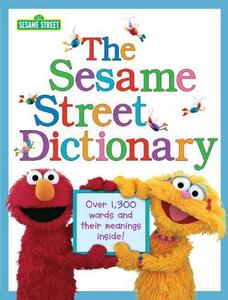 The Sesame Street Dictionary is an illustrated children's dictionary featuring Muppet characters from the popular television show Sesame Street. First published in 1980, it contains short definitions and sample sentences for around 1300 words, each accompanied by an illustration featuring a character from Sesame Street. In 1986, the dictionary was also issued as an 8-volume set under the title Big Bird's Sesame Street Dictionary. Kermit the Frog's nephew, Robin the Frog makes a cameo in this book on the page "frogs", also Miss Piggy makes a cameo in the book on the page "magazines" on a book called "Stars".
Read more or edit on Wikipedia