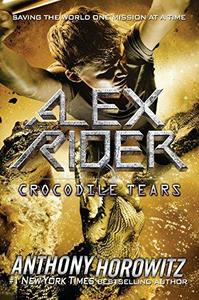 Crocodile Tears is the eighth novel in the Alex Rider series by British author Anthony Horowitz. It was released in the UK on 12 November 2009, published by Walker Books, and in the U.S. on 17 November 2009. On 17 December 2008, the title was revealed (in code) to be Crocodile Tears. The book was succeeded by Scorpia Rising, released in March 2011.
Read more or edit on Wikipedia