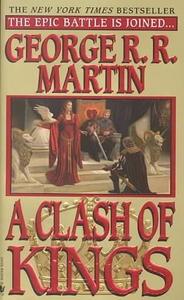 A Clash of Kings

A Clash of Kings is the second novel in A Song of Ice and Fire, an epic fantasy series by American author George R. R. Martin expected to consist of seven volumes. It was first published on 16 November 1998 in the United Kingdom, although the first United States edition did not follow until February 2, 1999 Like its predecessor, A Game of Thrones, it won the Locus Award (in 1999) for Best Novel and was nominated for the Nebula Award (also in 1999) for best novel. In May 2005 Meisha Merlin released a limited edition of the novel, fully illustrated by John Howe. The novel has been adapted for television by HBO as the second season of the TV series Game of Thrones. A Clash of Kings is also the name of the first expansion to the Game of Thrones board game.
Read more or edit on Wikipedia

part of the series: A Song of Ice and Fire
original title: A Clash of Kings
language: American English
date of publication: 1998
genre: high fantasy, speculative fiction novel
follows: A Game of Thrones
followed by: A Storm of Swords
www.georgerrmartin.com/grrm_book/a-clash-of-kings-a-song-of-ice-and-fire-book-two