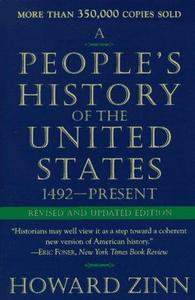 A People's History of the United States

A People's History of the United States is a 1980 nonfiction book by American historian and political scientist Howard Zinn. In the book, Zinn presented what he considered to be a different side of history from the more traditional "fundamental nationalist glorification of country". Zinn portrays a side of American history that can largely be seen as the exploitation and manipulation of the majority by rigged systems that hugely favor a small aggregate of elite rulers from across the orthodox political parties. A People's History has been assigned as reading in many high schools and colleges across the United States. It has also resulted in a change in the focus of historical work, which now includes stories that previously were ignored. The book was a runner-up in 1980 for the National Book Award. It frequently has been revised, with the most recent edition covering events through 2005. In 2003, Zinn was awarded the Prix des Amis du Monde Diplomatique for the French version of this book Une histoire populaire des États-Unis. More than two million copies have been sold. In a 1998 interview, Zinn said he had set "quiet revolution" as his goal for writing A People's History. "Not a revolution in the classical sense of a seizure of power, but rather from people beginning to take power from within the institutions. In the workplace, the workers would take power to control the conditions of their lives." In 2004, Zinn edited a primary source companion volume with Anthony Arnove, entitled Voices of a People's History of the United States. A People's History of the United States has been criticized by various pundits and fellow historians. Critics, including professor Chris Beneke and Randall J. Stephens, assert blatant omissions of important historical episodes, uncritical reliance on biased sources, and failure to examine opposing views.
Read more or edit on Wikipedia