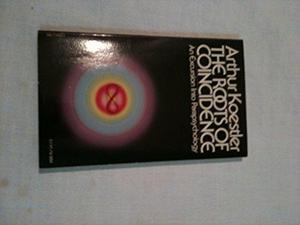 The Roots of Coincidence

The Roots of Coincidence is a 1972 book by Arthur Koestler. It is an introduction to theories of parapsychology, including extrasensory perception and psychokinesis. Koestler postulates links between modern physics, their interaction with time and paranormal phenomena. It is influenced by Carl Jung's concept of synchronicity and the seriality of Paul Kammerer.In the book Koestler argues that science needs to take the possibility of the occurrence of phenomena that are outside our common sense view of the world more seriously and study them. He concludes that paranormal events are rare, unpredictable and capricious and need a paradoxical combination of skillful scientific experiment with a childlike excitement to be seen and recorded. The psychologist David Marks criticized the book for endorsing pseudoscience. Marks noted that Koestler uncritically accepted ESP experiments and ignored evidence that did not fit his hypothesis. In The Psychology of the Psychic Marks coined the term "Koestler's Fallacy" as the assumption that odd matches of random events cannot arise by chance. Marks illustrates the fact that such odd matches do regularly occur with examples from his own experience. John Beloff gave the book a mixed review, describing it as "a typical Koestlerian performance" but noting that some of his claims about psychical research were inaccurate.
Read more or edit on Wikipedia