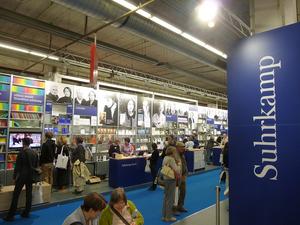 Suhrkamp Verlag is a German publishing house, established in 1950 and generally acknowledged as one of the leading European publishers of fine literature. Its roots go back to the "arianized" part of the S. Fischer Verlag. In January 2010 the headquarters of the company moved from Frankfurt to Berlin. Suhrkamp declared bankruptcy in 2013, following a longstanding legal conflict between its owners. In 2015, economist Jonathan Landgrebe was announced as director.
Read more or edit on Wikipedia