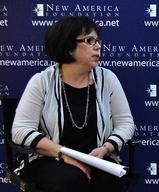 Deborah Blum (born October 19, 1954) is an American science journalist and the director of the Knight Science Journalism program at the Massachusetts Institute of Technology. She is the author of several books, including The Poisoner's Handbook (2010) and The Poison Squad (2018), and has been a columnist for The New York Times and a blogger, via her blog titled Elemental, for Wired.As a science writer for the Sacramento Bee, Blum wrote a series of articles examining the professional, ethical, and emotional conflicts between scientists who use animals in their research and animal rights activists who oppose that research. Titled "The Monkey Wars," the series won the 1992 Pulitzer Prize for Beat Reporting. Source: Wikipedia (en)