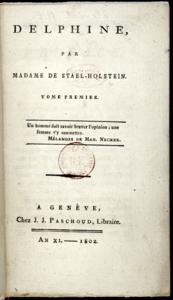 Delphine is the first novel by Germaine de Staël, published in 1802. The book is written in epistolary form (as a series of letters) and examines the limits of women's freedom in an aristocratic society. Although de Staël denied political intent, the book was controversial enough for Napoleon to exile the author. In this tragic novel, influenced by Johann Wolfgang von Goethe's The Sorrows of Young Werther and Jean-Jacques Rousseau's Julie, or the New Heloise, she reflects on the discussions on divorce in the National Assembly before the Concordat of 1801, when the laws were changed; the consequences after the Battle of Verdun (1792) leading to arrests and the September Massacres, the fate of the émigrés. The main characters have traits of Benjamin Constant and Talleyrand, and the liberalist view of the Italian politician Melzi d'Eril.
Read more or edit on Wikipedia