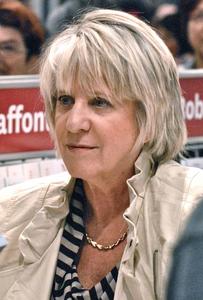 Denise Bombardier, (born January 18, 1941 in Montreal, Quebec) is a journalist, essayist, novelist and media personality who worked for the French-language television station Radio-Canada for over 30 years. Bombardier is noted for her standard French, in particular her European-norm pronunciation. She is a defender of the international Francophonie and has often been invited by Bernard Pivot to discuss the psyche of the French and the situation of the French language in France.
Read more or edit on Wikipedia