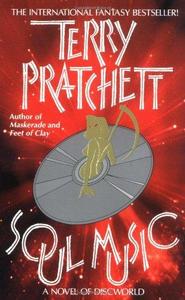 Soul Music is a fantasy novel by British writer Terry Pratchett, the sixteenth book in the Discworld series, first published in 1994. Like many of Pratchett's novels it introduces an element of modern society into the magical and vaguely late medieval, early modern world of the Discworld, in this case Rock and Roll music and stardom, with near disastrous consequences. It also introduces Susan Sto Helit, daughter of Mort and Ysabell and granddaughter of Death.
Read more or edit on Wikipedia