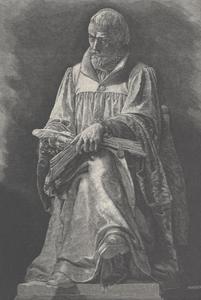 Gáspár Károli (1529?, Nagykároly – 31 December 1591, Gönc) was a Hungarian Calvinist pastor. Károli was born in Nagykároly, Hungary to a Serbian family, who had emigrated from Serbia because of the Ottoman invasion. The family converted to Protestantism. His birth name was Gáspár Radicsics. Károli started his school in Nagykároly and finished in Brassó. In 1556 he went to the Wittenberg Academy. In 1566 he ordered the Synod of Gönc. He translated the Bible to Hungarian in 1586 with supports of Sigismund Rákóczi. The translation is called the Bible of Vizsoly, after the town where it was first published in 1590. It was the first Hungarian translation of both the Old and New Testament. He is the most known and famous Hungarian Calvinist.
Read more or edit on Wikipedia