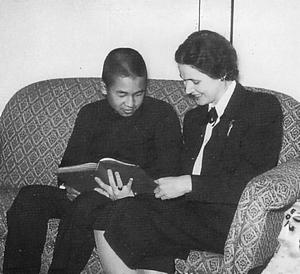 Elizabeth Janet Gray Vining (October 6, 1902 – November 27, 1999) was an American professional librarian and author who tutored Emperor Akihito of Japan in English while he was crown prince. She was also a noted author, whose children's book Adam of the Road received the Newbery Medal in 1943.
Read more or edit on Wikipedia