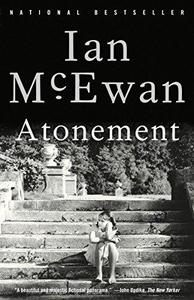 Atonement is a 2001 British metafiction novel written by Ian McEwan. Set in three time periods, 1935 England, Second World War England and France, and present-day England, it covers an upper-class girl's half-innocent mistake that ruins lives, her adulthood in the shadow of that mistake, and a reflection on the nature of writing. Widely regarded as one of McEwan's best works, it was shortlisted for the 2001 Booker Prize for fiction. In 2010, TIME magazine named Atonement in its list of the 100 greatest English-language novels since 1923.In 2007, the book was adapted into a BAFTA and Academy Award-winning film of the same title, starring Saoirse Ronan, James McAvoy, and Keira Knightley, and directed by Joe Wright.
Read more or edit on Wikipedia