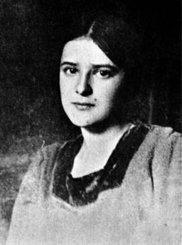 Stanisława Przybyszewska (Polish pronunciation: [staɲiˈswava pʂɨbɨˈʂɛfska]; 1 October 1901 – 15 August 1935) was a Polish dramatist who is mostly known for her plays about the French Revolution. Her 1929 play The Danton Case, which examines the conflict between Maximilien Robespierre and Georges Danton, is considered to be one of the most exemplary works about the Revolution, and was adapted (albeit with significant ideological edits) by Polish filmmaker Andrzej Wajda for his 1983 film Danton.
Read more or edit on Wikipedia