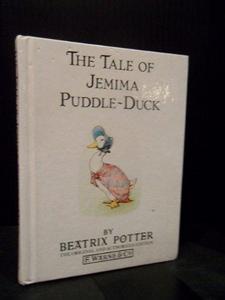 The Tale of Jemima Puddle-Duck

The Tale of Jemima Puddle-Duck is a children's book written and illustrated by Beatrix Potter. It was first published by Frederick Warne & Co. in July 1908. Potter composed the book at Hill Top, a working farm in the Lake District she bought in 1905. Following the purchase, her works began to focus on country and village life, incorporating large casts of animal characters and sinister villains. Jemima Puddle-Duck was the first of her books set wholly at the farm with background illustrations based on the farm buildings and yard, and nearby locales. Jemima is a domestic duck of the Aylesbury breed, whose eggs are routinely confiscated by the farmer's wife because she believes Jemima a poor sitter. Jemima searches for a place away from the farm where she can hatch her eggs without human interference, and naively confides her woes to a suave fox who invites her to nest in a shed at his home. Jemima accepts his invitation, little realising her danger: the fox plans to kill and roast her. Kep, a collie on the farm, discovers Jemima's whereabouts and rescues her just in time. Potter indicated the tale was a revision of "Little Red Riding Hood" with Jemima, the fox, and the dog parallels to the fairy tale's heroine, wolf, and woodcutter. Jemima, Kep, the farmer's wife, and her two children were all modelled on real world individuals at Potter's Hill Top farm. The book was hugely popular. Spinoff merchandise included a soft Jemima doll in bonnet and shawl, a Jemima painting book in 1925, and illustrated fabric placemats hand-fashioned by Potter and distributed to friends. Critically, the book is considered one of Potter's best.
Read more or edit on Wikipedia

original title: The Tale of Jemima Puddle-Duck
language: English
genre: children's literature
follows: The Tale of Tom Kitten
followed by: The Tale of Samuel Whiskers or The Roly-Poly Pudding

on Gutenberg.org
on Internet Archive