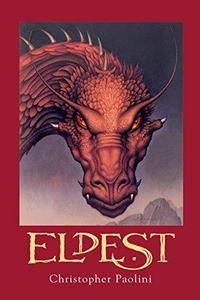 Eldest is the second novel in the Inheritance Cycle by Christopher Paolini and the sequel to Eragon. Eldest was first published in hardcover on August 23, 2005, and was released in paperback in September 2006. Eldest has been released in an audiobook format, and as an ebook. Like Eragon, Eldest became a New York Times bestseller. A deluxe edition of Eldest was released on September 26, 2006, including new information and art by both the illustrator and the author. Other editions of Eldest are translated into different languages.Eldest begins following several important events in Eragon. The story is the continued adventures of Eragon and his dragon Saphira, centering on their journey to the realm of the Elves in order to further Eragon's training as a Dragon Rider. Other plots in the story focus on Roran, Eragon's cousin, who leads the inhabitants of Carvahall to Surda to join the Varden, and Nasuada as she takes on her father's role as leader of the Varden. Eldest ends at the Battle of the Burning Plains, where Eragon faces a new Dragon Rider, Murtagh, and a new dragon, Thorn. Reviews pointed out the similarities between Eldest and other works such as The Lord of the Rings, while praising the themes of the book, such as friendship and honor. Several of these reviews commented on the style and genre of Eldest, while others considered the possibility of a film adaptation similar to the first film.
Read more or edit on Wikipedia