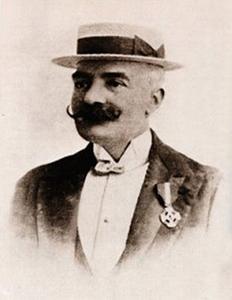 Emilio Salgari (Italian pronunciation: [eˈmiːljo salˈɡaːri], but often erroneously pronounced [ˈsalɡari]; 21 August 1862 – 25 April 1911) was an Italian writer of action adventure swashbucklers and a pioneer of science fiction.In Italy, his extensive body of work was more widely read than that of Dante Alighieri. Today he is still among the 40 most translated Italian authors. Many of his most popular novels have been adapted as comics, animated series and feature films. He is considered the father of Italian adventure fiction and Italian pop culture, and the "grandfather" of the Spaghetti Western.
Read more or edit on Wikipedia