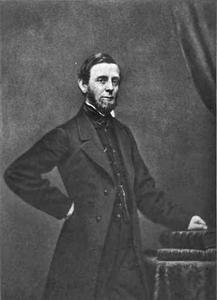 George Palmer Putnam (February 7, 1814 – December 20, 1872) was an American publisher and author. He founded the firm G. P. Putnam's Sons and Putnam's Magazine. He was an advocate of international copyright reform, secretary for many years of the Publishers' Association, and founding superintendent of the Metropolitan Museum of Art.
Read more or edit on Wikipedia