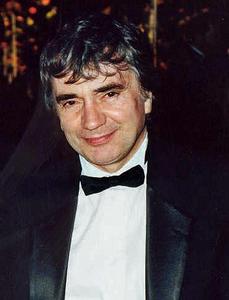 Dudley Stuart John Moore, CBE (19 April 1935 – 27 March 2002) was an English actor, comedian, musician and composer. Moore first came to prominence in the UK as a leading figure in the British satire boom of the 1960s. He was one of the four writer-performers in the comedy revue Beyond the Fringe from 1960 that created a boom in satirical comedy, and with one member of that team, Peter Cook, collaborated on the BBC television series Not Only... But Also. The double act worked on other projects until the mid-1970s, by which time Moore had settled in Los Angeles to concentrate on his film acting. His solo career as a comedy film actor was heightened by the success of hit Hollywood films, particularly Foul Play (1978), 10 (1979) and Arthur (1981). For Arthur, Moore was nominated for the Academy Award for Best Actor and won a Golden Globe Award. He received a second Golden Globe for his performance in Micki & Maude (1984).
Read more or edit on Wikipedia