Marc Elder (Marcel Tendron) (31 October 1884, Nantes – 16 August 1933, Saint-Fiacre-sur-Maine) was a French writer, winner of the Prix Goncourt for The People of the Sea.
Read more or edit on Wikipedia 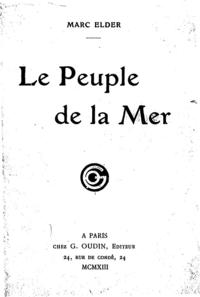